Home  >  Blog  >  How to Raise StartUp Funding with No Product

My 3rd novel, The Seeker, was rejected sixty-one times in the US. Eventually, Penguin Random House, published it worldwide after 42 months of nearly daily revisions. Four years of life gone in publishing a novel!

I found the startup fundraising process much more sane in comparison.

It took 60 days from idea to securing $1.3 Million seed funding for WhiteHat Jr. And this was in late 2018, well before the incredible funding momentum we’re seeing now in India.

What a golden time to be an entrepreneur! For any would-be entrepreneur with an idea and energy but no product or team yet, I hope this post can be of some value to go from idea-to-secured funding in rapid timing.

I spoke to a friend the day I had come up with the idea of WhiteHat Jr, shortly after giving my notice to Discovery.

He said it was too small.

Coincidentally, I had a meeting with a large tech company CEO the next day for a project for Discovery, who I was convinced would “get it”. The CEO said coding for kids was years ahead of its time for India and it would never work.

So I did what I should’ve done the moment the idea had come to me.

I took it to users.

Startups always lie at the edges of systems, not at the center of it. So people’s opinions, even experts, are seldom useful.

I hired a website designer on Upwork, the freelance platform, and created a demo version of the website overnight. Soon after, I contacted a teacher, who ran her own Science classes, and created the first version of a 6-class coding curriculum with her, using Zoom and Scratch.

We were ready for our Beta!

Our low fidelity product took 2 weeks to make from the day of the idea.

Your actual timing will vary based on your product. But I’d argue the simplest version of your product, often a zero-code solution, will take a fraction of the time and resources you think it will. You just need to cut off all the superfluous stuff. 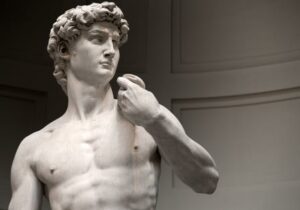 “The sculpture is already complete within the marble block, before I start my work. It is already there, I just have to chisel away the superfluous material.”- Michaelangelo

2. Get Your 1st Paying Customer to create a category (14 Days)

With a live website, I posted about free trial coding classes for kids on my personal Facebook page. We filled up our limit of 30 students and manually scheduled trial classes with the teacher (who later became my very valued 1st employee!). Soon after, we had our first paying customer. The customer paid the teacher the old-fashioned way– with a bank transfer.

I had a strong intuition then that we could create a category.

We just had to replicate the process of finding the one customer at scale.

Today, WhiteHat Jr operates in many countries and categories. But the basic framework of advertising for a trial class, an engaging trial class with a live teacher, and a creation-oriented curriculum that kids love, has stuck.

If you have just one paying customer, you can likely create a global category with millions of users!

Just scale what worked for that one user. That’s all you need to go confidently to the next step.

3. Reach out Cold to Venture Capitalists and Close the Deal!  (30 Days)

We grew the pilot to thirty paying customers over two weeks. Then, I approached venture capitalists completely cold on LinkedIn. 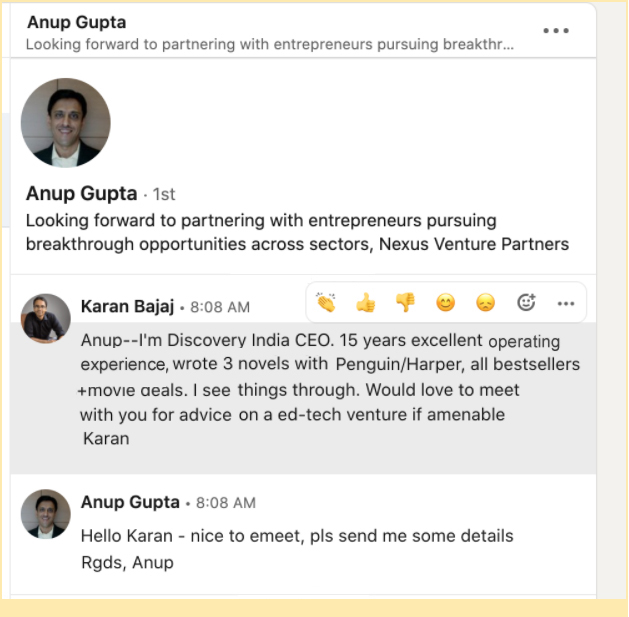 Six out of ten VCs I reached out to responded to the cold outreach above.

My odds would’ve probably been higher had I used my IIM networks. But I’m poor at asking for help, a lingering and I’d say rather foolhardy legacy of my extensive reading of Aristotle’s view of the Ideal Man in college (“He takes joy in doing favors to other men, but he feels shame in having favors done to him by other men”- A)

You can–and should–increase your odds with your networks!

Contrary to public perception, I found almost all Indian venture capitalists extremely responsive and courteous, both in their acceptance and rejection. I highly recommend the following exceptional early-stage investors. They were incredibly quick to respond and deeply astute in their evaluation, even if some of them rejected my pitch:

Within a month of pitching (you can see WhiteHat Jr’s seed deck here), I had my first term sheet. Easier than getting a novel published! But unlike a novel where a book deal is almost the end of the laborious process, getting a funding deal is barely the start of building a company. I don’t remember celebrating either my Seed or Series A funding rounds for even a day, there was almost so much more to get done! And funding was just a small milestone indicating the next stage rather than a destination of any consequence. But early funding did make the journey later less harder, so I hope this is useful for aspiring entrepreneurs debating whether to take a plunge.

Do let me know if this was useful! Also, what stage of idea generation are you in? Is funding your biggest barrier or is something else holding you back? Do drop me a note in the comments-I’d love to hear from you!

And if you found this useful, you may also like this new YT Video (<7 Minutes) on the 5 Personality Traits of an Entrepreneur.